The Ever Given’s Impact on the Marine Insurance Market

On March 23rd, the 400-meter cargo ship Ever Given owned by Evergreen ran aground in the Suez Canal after encountering high winds, grinding vessel traffic on the central shipping route between Europe and Asia to a complete standstill for almost a week straight. According to the Suez Canal Authority, nearly 19,000 ships passed through the Suez Canal in 2020 – an average of 51.5 ships per day, representing billions of dollars of trade that was blocked each day. While the vessel is now free, the event’s ripple effects will be felt across the industry for months to come.

There are still several uncertainties, including financial quantification, surrounding this incident, but the following is a brief overview of what types of marine insurance policies could be implicated and to what degree:

Any damage caused to the vessel during the stranding incident would be recoverable by hull and machinery (H&M) insurance. This could include damage to the bottom of the vessel, propeller, or other propulsion and navigation systems. H&M insurers will also be on the hook for the costs of the salvage operation, which encompassed the efforts required to free the vessel, like dredging, refloating, and towing. Because the ship’s technical manager, Bernhard Schulte Shipmanagement, has confirmed that the ship is safe for onward passage to Port Said, the vessel damage claim may be fairly minimal. Still, the salvage expenses could reach the tens of millions for hull insurers. 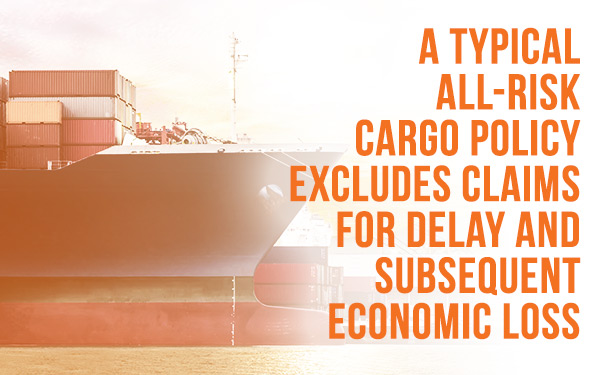 The cargo aboard the vessel will have largely been insured individually and directly by each container owner. Unless specifically amended by endorsement, a typical all-risk cargo policy excludes claims for delay and subsequent economic loss, so it is unlikely that shippers with cargo aboard Ever Given (or any of the roughly 300 ships at anchor for a week waiting for the vessel to be dislodged) would have a valid claim. In addition, it appears that the vessel was able to maintain its power supply, so any refrigerated or temperature-sensitive cargo is likely still in sound condition. However, there remains potential for cargo claims resulting from damage caused to perishable goods by delays.

Claims under this line of coverage have the potential to reach hundreds of millions, if not billions, of dollars. Protection and indemnity (P&I) placements address the bulk of third-party liabilities that could arise from an incident such as this, including any damage caused to canal infrastructure or claims for impeding and obstructing access to the canal. These vessel liabilities are most often covered by one of 13 mutual insurance groups that make up the global P&I club system, which provides marine liability coverage to over 90% of the registered global tonnage. It has been reported that Ever Given is entered into the UK P&I Club.

Liability claims may come flooding in from vessels that were blocked in the area, seeking remediation for loss of hire, business interruption, and costs incurred from cargo delays. Rumors were circulating that the Egyptian-run Suez Canal Authority may decide to impose penalties on the Japanese owner of Ever Given and seek compensation for its loss of toll revenue (estimated $16 million per day) and damage to the canal. After a number of failed settlement attempts, on April 13th, the Suez Canal Authority filed an application to arrest the vessel that the court granted. Arresting the vessel means that it will not be able to leave port until the $916 million claim from the Suez Canal Authority is resolved. Evergreen stated in a release that the claim includes $300 million as a salvage bonus and $300 million for loss of reputation. The UK P&I Club and vessel owners have asserted that the claim amount is unsubstantiated and that the magnitude is not valid.

Reinsurers help commercial insurers cover claims for major catastrophes such as hurricanes or wildfires in exchange for a part of the premium. Reinsurers typically raise rates after they experience large losses.

The P&I club system retains the majority of the first $100 million of any claim within a group pooling arrangement, but above that, they rely heavily on reinsurance contracts to provide the large liability limits the club system touts. It is a near certainty that the Suez Canal incident will trigger a significant payout amongst reinsurers.

Global reinsurers are already writhing after recent natural disasters, such as winter storms across the U.S. and flooding in Australia, as well as COVID-19 pandemic-related losses. The Ever Given claim will only add pressure to global reinsurers’ early 2021 earnings, likely resulting in additional strain on commercial insurance and reinsurance markets, and potentially driving rates and premiums even higher in a market that has been hardening for nearly two years.

The full impact of this event will continue to evolve in the coming weeks. If you have questions, reach out to Parker, Smith & Feek’s Marine Practice Group for further expertise.