Before You Begin Negotiations with a Doctor Recruit, Read This

Thousands of private practitioners are selling or dismantling their practices and taking jobs in hospitals. The reasons why doctors discontinue their private practices vary. Some doctors cite the volume of work involved in running a business, as compared to the return on investment. Others say that medical malpractice insurance, administrative costs, and increasing regulatory requirements make private practice too expensive to maintain.

Upon leaving private practice, some doctors feel they still need insurance coverage for prior acts that occurred during their private practice (“ opens in a new windowtail coverage”). Here’s where the negotiation pitfalls between hospitals and doctors begin. The case study below illustrates this problem. 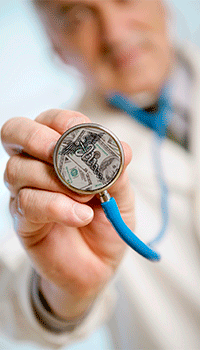 A rural hospital client of Parker, Smith & Feek was surprised by a generous benefactor who donated money to expand their oncology department. They scoured the country looking for the best department head they could find. They eventually opened negotiations with a private practitioner who was in the process of selling her practice and willing to move to the area.

Her counteroffer was close to the salary and benefits package that they expected, but there was a opens in a new window“prior acts” insurance provision. She wanted coverage for any claim or lawsuit related to acts prior to her hire date.

The hospital’s board and administrators were extremely excited for the opportunity to recruit this doctor and didn’t want to jeopardize the negotiation. However, they couldn’t take any chances, so they had their PS&F broker look at “prior acts” insurance a little more closely. After review, the broker found that the doctor’s previous practice had a fairly extensive claims history. Their broker advised it would be costly to include her prior acts under the hospital’s policy and there was a high probability that additional claims would come forward.  Additional claims could reach the hospital’s policy limits. In addition, these claims could increase future renewal rates and possibly result in cancellation.

The hospital administrators declined to honor the request for “prior acts” insurance and reinforced their original requirement of the doctor to purchase “tail coverage,” causing negotiations to terminate. Though disappointed, the hospital was able to recruit a qualified doctor who was willing to meet the tail coverage requirements.

In today’s healthcare environment, an increased number of doctors are seeking employment opportunities with hospitals. During negotiations with potential new recruits, it is a good idea to consult with your insurance broker to see if there are any policy conflicts and to advise a specific path for adequate coverage of the hospitals interests. This may help avoid a possible insurance dilemma in the future.