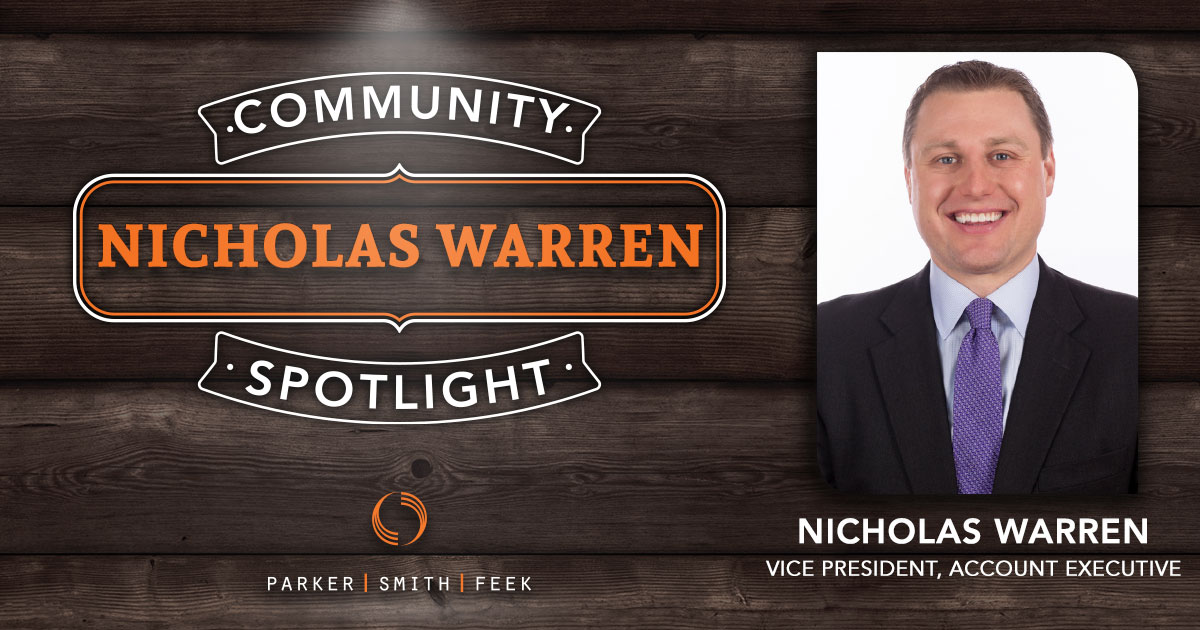 Meet Nicholas Warren; he is a Vice President and Account Executive on the Portland Commercial Team here at Parker, Smith & Feek. He is also passionate about supporting the local youth’s potential through his work with Big Brothers Big Sisters Columbia Northwest Chapter (BBBS), the local BBBS chapter for Portland, Oregon.

Nick first got involved with BBBS while working in Seattle in 2004. He and a colleague found themselves wondering how they could give back to their community in a positive way. Together, they started researching different non-profits to see what sounded interesting and where they could best direct their energy. Nick stumbled on a networking opportunity with BBBS, and he and his colleague were hooked.

BBBS’ mission states, “For children facing adversity, Big Brothers Big Sisters builds bonds to change lives, enabling kids to reach their greatest potential through strong and enduring, professionally supported, one-to-one relationships and a network of support.” The national chapter has been active for more than 100 years, furthering their belief that every child has the inherent ability to achieve their desired level of success in life. Though the organization is national, each local office operates as their own entity with their fundraising efforts and dollars going back directly into the communities they represent. With that said, the mission of all chapters remains the same, to pair qualified adults (“Bigs”) with at-risk youth who are struggling in some capacity (“Littles”), providing them with mentorship, tutoring, consistent support, and other life skills.

Nick and his colleague in Seattle initially chose to participate in the BBBS’s school-based program. For approximately two hours every other week, they would go to a local elementary school and meet with their Littles. Nick’s Little, Brandon, was an enthusiastic third grader. During their visits, Nick would help Brandon finish his homework, read, or spend an hour of educational centered time before playing sports, games, or computer time to lighten the mood. As Nick said, “It was just such a great way to give back and have a lot of fun too.”

Later, Nick’s career took him out to New York, but not away from his dedication to helping youth in his community and being active with BBBS. His employer set up a Beyond School Walls program with his local New York BBBS chapter, which he and nine of his colleagues enthusiastically signed up for to work with 10 high school students from Brooklyn. Their group hosted ten Littles at their office in Midtown Manhattan for two hour every month, where the Littles would take the subway in from Brooklyn. It was a great way for these high school students to experience Corporate America, learn about life skills, help discuss and plan for their future, and spend an afternoon in the city with a positive adult who cared about them and their future.

For Nick, this was a very rewarding experience. In particular, he remembers that when the Littles started the Beyond School Walls program their sophomore year of high school, only one of ten raised their hand when asked if they had any aspirations of attending college. However, by the time they all graduated high school three years later, nine of the ten continued their education at a secondary school of some form. “That was really amazing,” Nick reminisced, “I’m not sure how much of our time together each month actually influenced this, but getting to see these kids excited for college and proud to announce their plans for the following year really felt rewarding to all of us.”

After almost seven years in New York, Nick decided to move back home to the West Coast. Nick now works to support the youth of the Portland, Oregon area, and his dedication has only increased. Upon moving back to Portland, Nick discovered that the high school graduation rate in Oregon was in the bottom 10% of the country! According to Nick, “I was in shock. Oregon was ranked 47th in the country for high school graduation rates. That’s just not okay by me, especially since this isn’t driven by rural locations in Oregon, but within Portland itself.” 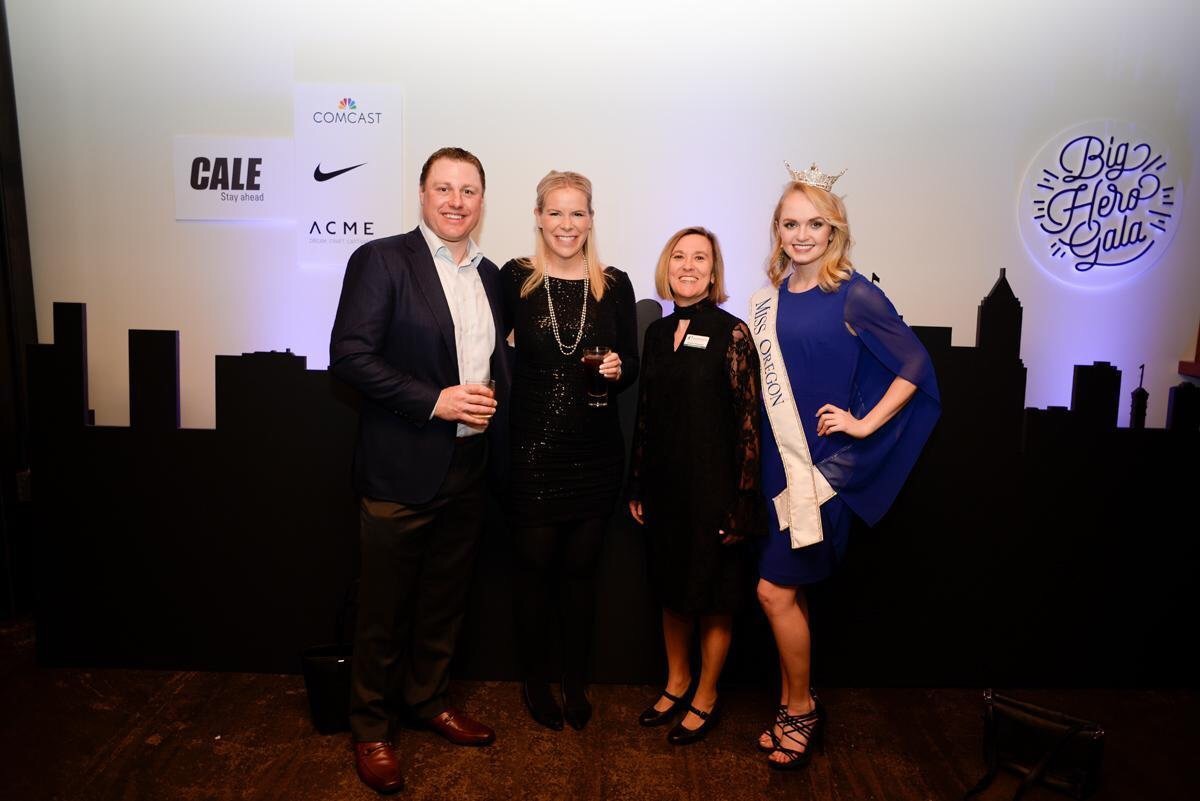 He now sits on the Board of Directors for the BBBS Columbia Northwest Chapter, and actively encourages friends, clients, and colleagues to join in the group’s efforts. Nick has facilitated Parker, Smith & Feek sponsoring a variety of fundraising events, including a table at the annual Big Hero Gala and Biz Bowl events to help raise funds for the local chapter. As the Head of Fund Development on the board, he also helps organize and raise money for events such as Rappel for a Reason (participants collect sponsorship donations to literally rappel off a downtown Portland office building), Bowl for Kids’ Sake, Graduation, and their Back to School Campaign. He also actively utilizes social media to promote events, recruit other volunteers, and just generally get the word out about the organization and the great things they do.

For Nick, he has really seen how important many of the non-profits are to the well-being and success of our community’s youth. For example, when he was living in Seattle, he played in the Puget Sound basketball league, which one night happened to be at the local Boys and Girls Club. “One day I walked in, and my Little Brother, Brandon, was the scorekeeper! It was such a funny coincidence to come in and see him sitting there, and so exciting to interact outside of our usual school-based meetings. It just makes sense to me…so many of these groups all work together in order to do the same thing: help kids in our community, who often come home to empty houses, don’t always know where their next meal is coming from, and are just looking for someone who will take the time to ask them how their day went. I just love that BBBS makes such an active effort to collaborate on behalf of so many kids.”

“I was in shock. Oregon was ranked 47th in the country for high school graduation rates. That’s just not okay by me…”

To learn more about Big Brothers Big Sisters, volunteer, or to get involved, visit http://www.bbbs.org/ or https://itsbigtime.org/.

Interviewed and edited by Sara Brauchla, Parker, Smith & Feek’s Marketing Specialist. She is our dedicated copywriter and editor of all published materials, including spotlights, which offer a peek at who our hardworking employees really are when not consulting on our clients’ insurance programs. Stay tuned for her next installment, and refer to our blog or articles page for more of her work.
Share this article: