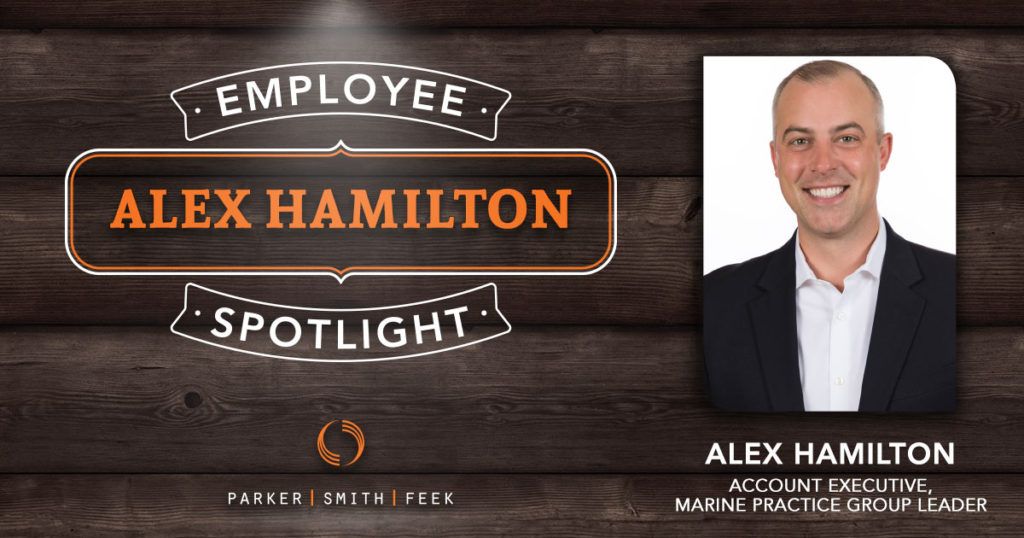 What inspired you to start a career in marine risk management?

Well, like most people in the industry, I fell right into it… (laughs).

Several years ago, I was working in the professional golf industry with a small non-profit company. I was looking for growth opportunities, and there just weren’t any that would allow me to stay in Portland. I was starting to get a bit bored after we lost our Title Sponsor; I loved what I was doing, but there just wasn’t enough of it to keep me busy.

So, I started poking around. I was looking at a few different jobs in commercial real estate or even with a chemical manufacturing company, and was reaching out for references. One of those people asked me, since I was already prepared to make such a big transition from golf, if I had ever considered insurance as a career? One week and six interviews later, I had accepted their offer to join the team and jump into marine insurance. That was about eight years ago now.

What’s something exciting going on in the marine insurance industry right now?

Well, it’s not so much exciting as it is challenging. After a decade of a prolonged soft market where rates were continually going down, we’ve crossed the equilibrium where insurers can’t sustain the rates relative to losses and are now very much in a hard market. That means that underwriters and carriers are calling the shots in a way that, at least in my career, hasn’t happened. It’s causing heartburn for everyone involved in the industry.

However, as a “glass half-full” guy, I know this will open up opportunities for us as a firm. Companies that haven’t changed brokers or gotten fresh quotes in years because their rates have been going down will undoubtedly be getting less pleasant renewals, which should be a catalyst for some of those companies to shop around.

So after your background in the nonprofit world, do you still volunteer with any organizations or charities?

I’m also a member of the Tournament Golf Foundation, which is the volunteer arm of the non-profit I used to work for.

Lastly, I served as past secretary, vice president, and president of the Maritime Commerce Club here in Portland.

For right now that’s it. I’m keeping my eyes open for something to participate in that’s at a regional or national level; I’d like to expand my footprint.

What is the most valuable advice you ever received?

The choices you make in life dictate the life that you lead. My dad said that. He always told me to think of life as a big bucket; every decision you make, good or bad, is a drop in that bucket. When it’s all said and done, whatever is in there will define who you are.

Unfortunately, being a resident of the Pacific Northwest, my favorite pastime is only an option for about three months of the year: playing golf. So, I get out when I can.

My family has a little condo over in Gearhart on the Oregon coast, which has a special place in our heart. We spend a good amount of time there.

I also have a six-year-old English yellow lab named Zoey. She’s the best dog ever. We go for lots of hikes and walks all over the place.

What makes you passionate about your work?

Marine insurance is very unique and niche. I’ve worked with some very sophisticated marine operations, whether it’s tug and barge, marine construction, stock throughput, or shipyards. Oftentimes, these companies, particularly ones whose operations are only in the marine space, have been family-owned for decades, and even centuries. Those kinds of businesses are by far my favorite to interact with. They usually care more about their employees, their service providers, and are more appreciative and reasonable to deal with.

Placing insurance is the easy part, right? Helping people with unique problems craft a solution so they can continue to run their business the way that the need to – that’s the part that ultimately gets me excited.

So I have to ask…how many Alexander Hamilton jokes do you hear per day?

I knew this question was coming…that dang play…

More than I could ever want! I made it 30+ years with only TSA, or occasionally some history buff who thinks that I was named after him purposefully (I wasn’t), making a comment.

It honestly wasn’t that bad until the play started blowing up and getting popular. Since then, I hear something almost every day. I refuse to go and see the play because of it, and have become a huge opens in a new windowAaron Burr fan.

Where are you from? Portland, Oregon

Family? Wife, Mom, Dad, Brother, Sister-in-law, and, of course, Zoey. On my Dad’s side alone, he had 5 siblings and I have 14 cousins. The Annual Christmas Eve party is pretty awesome.