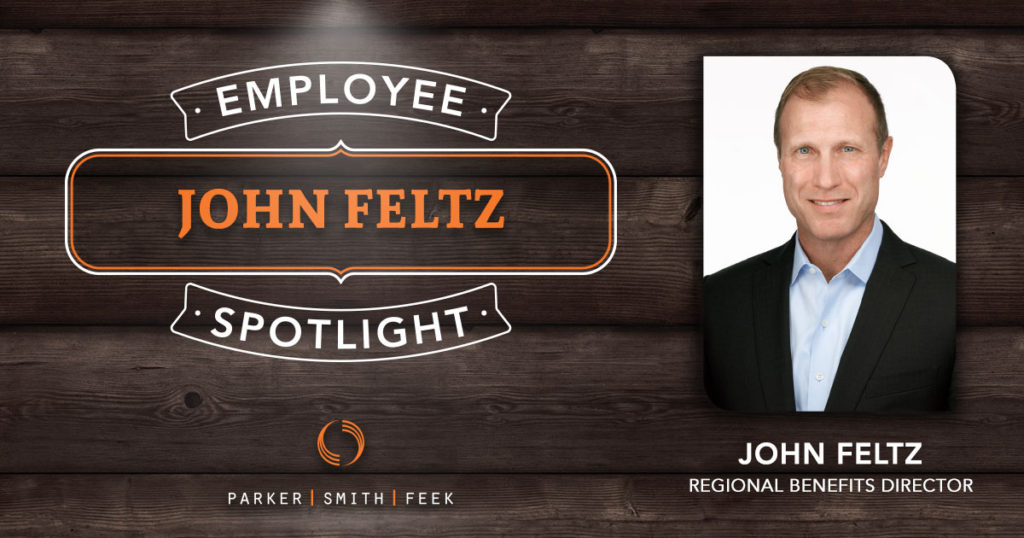 I’m essentially the practice leader for our Bellevue benefits team for employers with more than 50 employees. My personal philosophy about my role is to first support my staff as a servant leader and provide them with the necessary resources and tools to help take us from where we are today, to where we want to be.

Secondly, I’m responsible for creating an environment where we can not only bring in the best people, but make them really happy about being here. I think we have a great and solid foundation, and we will continue to grow with great people who fit our culture of professionalism without being stuffy.

What inspired you to start a career in benefits consulting?

My girlfriend (wife now) and I were working at a high-end resort in Hawaii, and trying to find a way to get back to the mainland. She was from Seattle, and it just so happened that one of my college roommates was starting a hybrid risk management/insurance company in town. He asked me if that would be a good career transition for me out of the hotel business, and I felt that it would be.

You see, my best day at a hotel would result in me making somebody really, really rich, really, really happy. I felt like the insurance industry would allow me to make a meaningful impact on people’s lives, and push positive change. Yes, ours isn’t the most effective healthcare delivery system in the world, but that offers lots of opportunities for us to improve upon it. For me, I still try to find a way every day to make my mark and have a positive impact in the world around me.

Speaking of Hawaii…You waited on some of the world’s rich and famous while working as a butler on Lanai. That’s not exactly a job you apply for in the classifieds or online. How’d you get the gig?

I was just out of college and bought a one-way ticket to Hawaii to visit my brother. Lanai is so small that there was really only one employer – the resort. So I just kind of waited until a good opportunity came up; I had a respectable college degree, so they hired me to train as a butler charged with taking care of high-end clientele.

I started in that position, and moved up until I was a front office supervisor. I had oversight of a staff of over 50 people, most of whom were working in pineapple fields a few years prior, and were then expected to deliver high-end service required of one of the world’s top 10 resorts. It was especially challenging because most of the workers were in a union – so I had to learn how to navigate that environment quickly. It’s also an environment where you have to deal with problems head on; guests were highly successful people and when they had issues, you couldn’t hide behind a phone. All of the escalated issues were funneled to me face-to-face. This was all in my early 20s.

It was an incredible opportunity for me, to become a manager in a complex environment at a young age. At the same time, I don’t think my age made a huge difference, because I’ve learned that one thing doesn’t change as you develop more in your career: the golden rule. If you treat people respectfully, whether you’re a manager or not, then you’ll gain the respect of your colleagues, especially in Hawaii. Doing the right thing over and over again was just…how I was brought up.

Who was your favorite guest, and why?

Oprah Winfrey. She treated everybody very respectfully and seemed very…normal. I was her personal butler and took care of her daily. For her entire stay, people were coming up to her telling her how she had personally changed their lives, all day long. She still remained just as grounded, and treated everyone as equals.

Lots of guests left letters, but she’s the only one whose letter I kept. I still have it now. And this is coming from a jock who also met Joe Montana…Wayne Gretzky…Scottie Pippen…pretty much any sports celebrity. Oprah was still my favorite.

Absolutely. I’m currently the chairman of the board of The American Lung Association of the Mountain Pacific. That’s a seven-state region encompassing Hawaii, Alaska, Wyoming, Montana, Oregon, Idaho, and Washington; it’s a big footprint. My role is to help engage our local boards with what we’re doing nationally, and to make connections with what we are deploying nationally in a way that makes sense locally.

Our territory is tricky and poses lots of challenges; we have the largest geographic landmass, and the fewest number of people of all the regions. Then take, for example, the fact that Hawaii is one of the least expensive states for healthcare, while Alaska is the most expensive. Each state has different health issues, different needs, and a different political environment in which to operate.

I personally know a lot of folks with lung diseases or who’ve had lung cancer, and I myself have asthma. Most people don’t know that lung cancer is the number one cancer killer. It’s a great organization that’s highly rated (in terms of what we do with each dollar received in donations) with an extremely complex mission. We face all sorts of obstacles – there’s even a stigma to having lung problems in the first place. A lot of people simply blame lung issues on tobacco smoking. But there’s a host of other factors that come into play: wildfires, which means we need address climate change as an overarching issue; vaping, because there’s a false narrative that implies it’s not bad for you (it is); and even addiction issues, because we’re penalizing kids who are addicted to nicotine in their teens instead of helping them recover.

You’re a big San Antonio Spurs fan, despite not being from Texas. Why?

Because they work as a team. It’s never about individual performance; it’s about how they work together. Usually in the NBA, the best teams do well.  Having talented individuals certainly helps, but it can only carry them so far. The teams that I enjoy watching are the ones that execute exceptionally well, all the time.

Where are you from? North Collins, New York, a small farm town outside of Buffalo