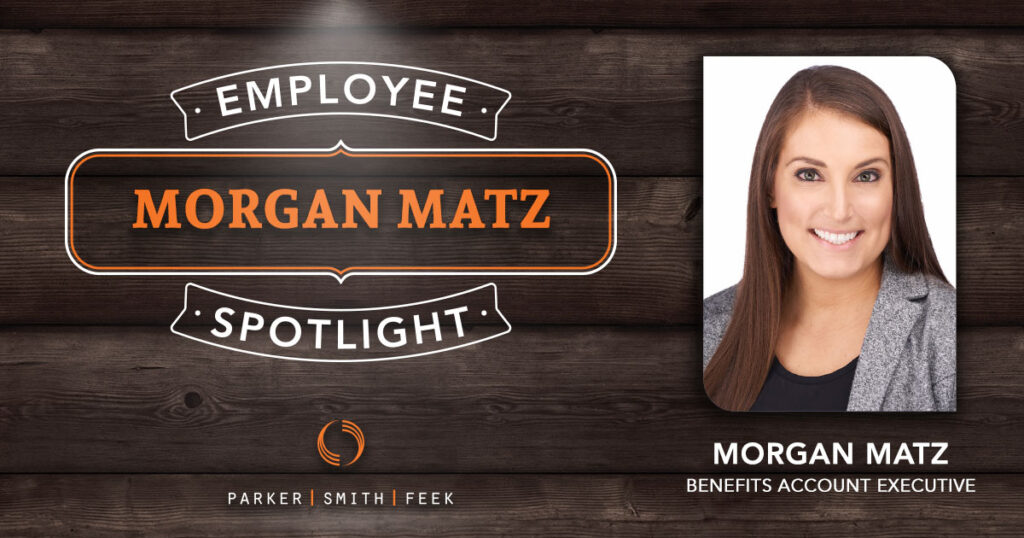 I like to become entrenched with all my clients in their day to day. I want to become an extension of them. I’m not your typical “go in and sell you something, pop in at renewal time, and then hand you off to the account manager” executive. I don’t just want to know a client’s C-suite – I want to know HR, payroll, etc. I want to be considered another team member for them.

What inspired you to start a career in employee benefits?

When I went to University of Washington, I was going to become a doctor. I was really into infectious diseases. To this day I still love to read science journals and totally nerd out.

Anyways, I graduated with my degree in biology and physiology, was studying for the MCAT, and realized that I was completely burnt out after four years of hard work. I also had some family members in healthcare – some still in their residency, and others who were fully practicing – and shadowed a few of them. It was not what I was expecting: a lot of churn and burn and paperwork. Even my job at the time for a UW lab was just benchwork and pipetting. I sorely missed human interaction and considered the reality that I may never get to talk to people as much as I wanted to in my future career.

I finally had the thought, “Maybe this isn’t what I really want?” I still wanted to be involved in healthcare, but I had no idea what to do. My stepdad was in the benefits industry and set me up a meeting with one of his colleagues at a brokerage. They offered me a job as an account administrator on the spot, I started a week later, and never looked back.

Occasionally I think, “Maybe I will go back to med school?” But it’s always a pretty fleeting thought. I’m very happy to have worked to where I am today.

You ran with the bulls in Pamplona. Tell me about that, was it as terrifying as it’s described?

It’s pretty terrifying, yes. I looked it up ahead of time and wasn’t sure what to expect; the descriptions were all over the place. Some were saying it’s fine as long as you’re mindful, others were stories of people getting trampled…But, my sister and I decided to go anyways.

It was fun but also traumatic. We made some safety decisions, like firstly to be sober. We also participated with a group of veterans who’d been doing it for decades. They told us all the spots to stay safe and where to avoid loitering.

They run with the bulls for a full week, but we only ran for one day. We were fine, but plenty of people did get horribly injured. Afterwards the ambulances would roll up and take everybody in for care – it was like clockwork. Then everyone just celebrated for the rest of the day before the bullfights in the evening. It was a once in a lifetime experience that I fully recommend – but only if you have thick skin.

What’s something exciting going on in the benefits industry right now?

It’s something that can be considered good or bad, depending on your perspective…reference-based pricing. It’s a plan structure that gets rid of the traditional network and premiums. The plan owner works with a law firm to create a plan document that lays out a reimbursement strategy for providers and hospitals that’s based on a percentage over Medicare.

There can be resulting litigation when providers don’t want to accept the reimbursement percentage, but it’s been pretty rare so far.

I think healthcare needs more transparency. Some charges for certain types of care are, frankly, egregious. Reference-based pricing might not be the perfect answer, but it certainly adds that transparency to the process, and that’s where the industry is moving.

What is something your co-workers would be surprised to learn about you?

I’m ultracompetitive – to the point where it’s an issue with some friends and family. I am a sore loser. No one ever wants to play tennis or Monopoly with me. I’m trying to keep it in check, but I’m sure at some point it’ll come out.

That’s a hard question. Right now, I’m really into Brunellos –a 100% Sangiovese wine produced from a tiny region in Italy. Like Champagne, it can only be a true Brunello if it’s grown in that very specific region.

I was in Tuscany this past fall and toured a bunch of wineries where I tried it. I actually became a member of one winery, Casanova di Neri, and just got my first shipment that I’m really excited to try.

I always love a bold cabernet, and whites as well. I’m not terribly picky. (laughs)

I also love to travel. My older sister just married a Dutch gentleman and they live in Amsterdam, so that gives me an excuse to go to Europe once a year to visit. We were in Tuscany last year for her wedding, specifically. My fiancé and I always need to have a trip on the books to look forward to – right now our next plans are visiting Croatia and Germany, and maybe a Greek island that we haven’t visited yet.

Where are you from? Kirkland, Washington

Family? Mom, Stepdad, three sisters, and fiancé, Trevor. No dogs as of yet.

Seattle favorites? Leavenworth in the wintertime.

Favorite quote? “Get comfortable being uncomfortable.”

Interviewed and edited by Sara Brauchla, Parker, Smith & Feek’s Marketing Specialist. She is our dedicated copywriter and editor of all published materials, including spotlights, which offer a peek at who our hardworking employees really are when not consulting on our clients’ insurance programs. Stay tuned for her next installment, and refer to our blog or articles page for more of her work.
Share this article: