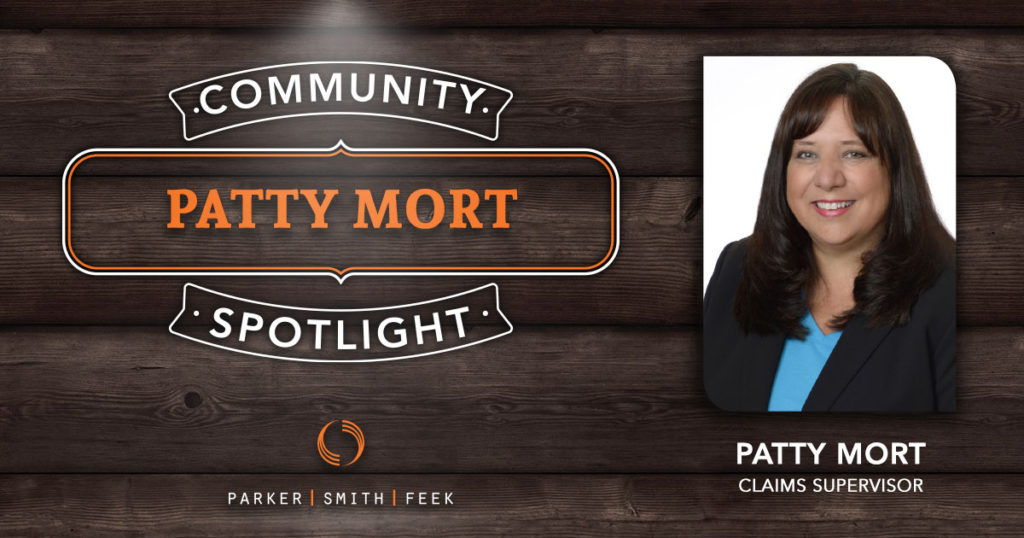 Parker, Smith & Feek Claims Supervisor and Employee of the Year, opens in a new windowPatty Mort, will tell you herself – she is a people pleaser. She cannot stand when somebody doesn’t like her. It doesn’t matter whether it’s a client over the phone, or a colleague at Parker, Smith & Feek – she doesn’t want people to be unhappy. That quality has served her well throughout her career, because where others might falter or fail when faced with a socially uncomfortable situation, Patty turns it into an opportunity to overcome.

Patty’s tenacity is clear when you look back at her professional history. Her original offer letter at Parker, Smith & Feek began, “Although your background and experience aren’t what we normally look for in a search for an assistant, we were impressed with your desire to learn and your energy.”

Patty laughed at the memory, “I’ll remember that line for the rest of my life; it’s kind of a negative thing to say. Unless they say that to everybody in their offer letters?”

She was hired as an Associate Account Administrator focusing on construction in 1994, without much knowledge of insurance. She proved to be a quick learner however, and was soon recruited for a role in “business development” by then future President and CEO, Greg Collins.

It was Patty’s job to cold call potential prospects and, if the call went well, to set up the subsequent follow up meeting with an account executive. A pattern began to emerge when the executives followed up on their appointments:

“Well Patty was so nice over the phone…”

“We just couldn’t say no to Patty!”

It became clear that Patty was the common denominator influencing their decision to say yes. She was never pushy, and never wasted anyone’s time. She asked for 20 minutes to deliver the Parker, Smith & Feek message and, if it didn’t work out, then that would be the end of it. People responded to that approach, whether it was just the change of pace from an ordinary sales call, or something about Patty herself. She had a knack for finding a way to overcome any “no’s.”

But cold calling was not the career that Patty wanted for herself. When a position in the Claims Department opened up, she saw an opportunity for growth. She interviewed and once again was selected as the best possible candidate, despite an incomplete knowledge of claims. Patty spent time studying and learning from her colleagues, primarily Theresa Genovese, about the industry. She’s stayed in claims ever since, serving as department supervisor for the past five years.

Patty’s impact in her role is difficult to quantify, but is pervasive and well known among her colleagues and clients. Claims Manager opens in a new windowEd Rhone, Patty’s supervisor, can help put to words what makes her so effective.

“She has an unbelievable way about her that sets people at ease. It’s inherent. You can’t teach it.” Ed says of Patty. Ed was responsible for nominating Patty as Employee of the Year, and has done so for several years running.

“I am quite demanding, as Patty knows. That’s just the nature of our department. We need to be held to a higher standard of service than the status quo. People usually call the claims department because something serious has happened and they need our help to fix it. If we don’t deliver, that could be devastating to the client and turn into lost business for us. So I am constantly challenging her to make our department and service more efficient, and her answer is always ‘yes.’ She will always find a way to deliver.”

Whether it is communicating crucial details of a large claim to a client or improving team dynamics within the department, Patty’s desire to please people continues to be a differentiator. Even the most disgruntled callers merit excellent customer service, in Patty’s mind. She delights in taking a negative situation and turning it into something positive, firmly believing that every person calling Parker, Smith & Feek Claims deserves the absolute best that we can provide. Ed continues, “Patty has this incredible ability while on the phone to show sincere empathy while also accurately explaining the coverage, and setting realistic expectations with the client. It’s amazing, really, how she does it.”

Going above and beyond in client service isn’t all that it takes to win the Parker, Smith & Feek Jean Smith Recognition of Excellence Award and be declared Employee of the Year. Patty lends her abilities to opens in a new windowPeace for the Streets by Kids from the Streets (PSKS), a non-profit organization that supports homeless and at-risk young people to empower themselves and lead fulfilling lives. Patty volunteers and helps with procurement for their annual silent auction. Even when faced with such a heartbreaking and complicated problem, Patty can spot the positivity.

“A lot of these kids are LGBTQ, and I think because of that, they’re more easily skipped over and often misunderstood by those who are uneducated or unwilling to understand their issues. There is good in all of them. They just found themselves on the wrong side of the tracks. Their stories and triumphs are endearing and important.” We here at Parker, Smith & Feek are extremely lucky and proud to have Patty as a colleague, and we thank her for her service to the firm, our clients, and the community. There are no doubts that she will find a new opportunity to overcome, and will succeed in her efforts.

“She has an unbelievable way about her that sets people at ease. It’s inherent. You can’t teach it.”