We Played Hard: A Summer of Softball 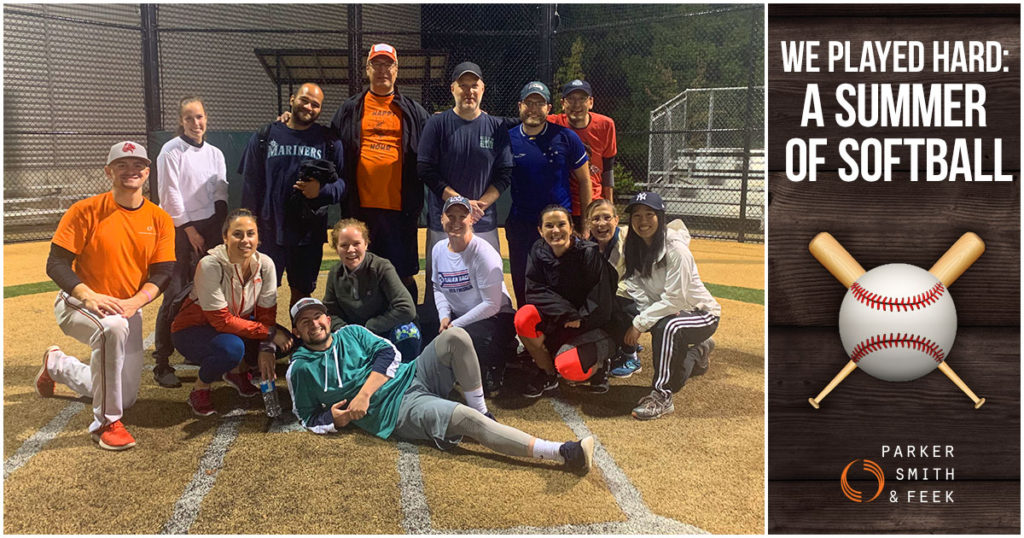 Parker, Smith & Feek fielded a softball team to compete in the Bellevue Baseball/Softball Athletic Association’s 2019 Summer Season. Following is a note from Head Coach Chris Sibley on the results from a well-played season.

As a man who stood in front of our firm just a few months back, promising a championship in my first year as head coach, I write this letter with a heavy heart.

This heart of mine was once sad, for we had given our everything, but fell a few runs short of it all. We had come together as not only coworkers, but friends and teammates for those three months of summer softball. We learned of the passion and commitment of those around us, something not often seen by the naked eye or from the few chances we get to see one another from different departments. It was beautiful.

We had the rare opportunity to spend our Tuesday nights with one another. We all have families. We all have lives outside of work, but these men and women committed to an opportunity that occurs only once a year… the chance to compete in one of the most competitive softball leagues in the city for the title and the glory of winning it all, but most importantly, to see our faces enshrined on the Parker, Smith & Feek timeline wall as CHAMPIONS.

It was tough at first. Some of us had never held a bat before. Throwing a ball was foreign to many. The summer sun was draining our energy and we lost a few to injury early on, but we pushed through. The season started off slowly, with us only winning one of the first four games. This team was resilient and a slow start was nothing more than a challenge to beat, for we knew what we were destined for – a CHAMPIONSHIP.

As the weeks flew by, we grew as a team insanely fast. After a blink of an eye, we were beating teams convincingly, running around the bases like it was track practice. But no, this was softball. A bunch of insurance professionals, family, and friends that banded together to make the perfect team. Powerful, fast, and consistent: the three benchmarks of a championship team.

So we fought on. We quietly rose through the rankings, beating team after team. We were once close to last in the league, but by summer’s end, we were atop the leaderboards! Finishing the season 11-5 was one of the proudest moments as a coach I had ever experienced… but we weren’t finished. We set out to do one thing…TO WIN IT ALL.

So there we were, in the playoffs, just two wins away from our goal. We were locked in and not even the downpour of rain would keep us off that field. So we played on…

The first game was just a warm up for us. Our bats were alive. The defense was in sync. We were rolling like a well-oiled machine and mercy-ruled the other team in five innings. Now it was our time. The Final Boss was The Bellevue Club; the one team standing in our way from ultimate victory and our one goal – to win it all.

We played hard; we went out there and left it out on the field. They came out swinging, and we found ourselves in a hole. Down seven after the first inning, we knew we had to get our heads in the game. So we did. We slowly chipped away at the lead. They looked shook. We were rolling. Still down in the last inning, rain pouring down on us, we went out there and got on base. Sadly it just wasn’t enough. We were handed our final defeat.

Soaked from the rain and tired from a long season, we held our heads up because what we accomplished was something we haven’t seen in this office since the championship days of 2013, and it was missed.

Even though we lost in the final game, I feel like we all won for we had gained not only a better understanding of each other, but friends along the way.

I can’t wait for next year. We’re coming for it all once again.