You may have heard that wood frame projects are more challenging to insure, but unless you received a recent quote on one, you might not realize what this means. Though the market is challenging, there are some steps you can take to be prepared and help obtain the best quotes possible.

State of the Current Market

2020 was an especially difficult year, with a significate number of large wood frame fires causing the market to harden even more dramatically than previous years. By year’s end, there were at least 25 large construction fires valued at over $500 million in losses. Rates started increasing in the beginning of 2020 and continued to increase after every new reported large fire. Carriers do not advertise premiums collected or losses paid, but there are industry estimates that total fire losses in 2020 totaled around $1 billion, and 2020 is the fifth consecutive year where more claim dollars were paid than premiums collected. January 2021 started with two fires in the Las Vegas area, with one valued at around $30 million and caused by arson. Since then, there have also been a couple of fires in the Seattle area, with one estimated at $3 million in losses and also caused by arson.

At the end of 2019, annual wood frame rates were around .35, but as we approached 2021, carriers indicated that insureds should expect rates to start at .50. As fires continued in 2020, numerous carriers and reinsurers exited the wood frame market; those that stayed increased rates, decreased capacity, and required more stringent underwriting criteria.

Carriers are looking at general contractor’s websites to determine previous experience with project type, requiring evidence of fire and water mitigation plans, and some are asking for loss histories. Numerous carriers continue to be cautious about insuring projects in certain metropolitan areas fearing civil unrest, riot, or arson exposures. 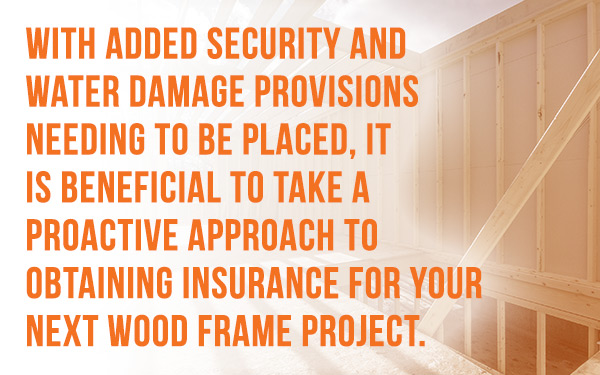 Other carriers are looking at crime scores for project locations and declining to quote or establishing more stringent security requirements based on the results. You should expect minimal security requirements to include fencing, perimeter lighting, and carrier approved third-party CCTV security monitoring. In certain cities, such as Seattle and Portland, and areas with higher crime scores, carriers are also requiring after hour watchmen and, in some incidences, fire retardant spray or powder. In 2020, carriers also started increasing water damage deductibles, with some also applying a sublimit for water damage claims. Carriers are starting to ask about water flow detection systems, with at least one requiring it and others offering a premium savings or more favorable underwriting if a system is in place.

Some brokers are promoting special programs advertising reduced rates and increased sublimits, but these programs have limitations:

We do not anticipate that the market will improve for a while, so it’s imperative to take a proactive approach to obtain the most advantages quotes to insure your wood frame projects. If you are looking to start a large wood frame project in the next year, be sure to let your broker know; the more time available to evaluate your project and work with you to build a strong submission package, the more favorably carriers will respond. Working with a brokerage firm that will be honest with you and serve as your advocate will help; at Parker, Smith & Feek, our Project Risk Service team is here to assist.